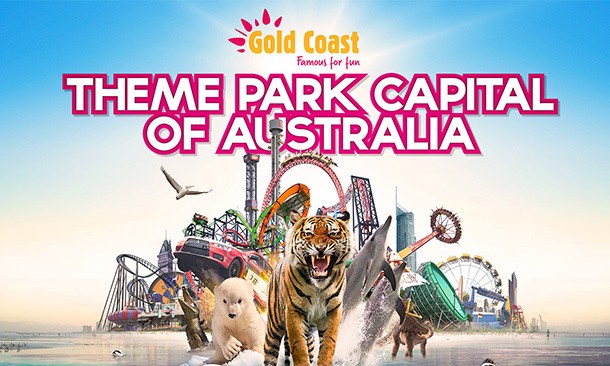 Theres no doubt that a trip to the Gold Coast will never be complete without being in Surfers Paradise. This region itself has a treasure trove of attractions and things to do alone or with your loved ones. But what if you dont have a lot of time or money to stroll?

My suggestion is to begin with the best attractions in Surfers Paradise! I havent just plucked this list out of thin air either; Ive actually compiled the list from none other than TripAdvisor. One of the worlds most popular, if not the most popular, travel website where people from all around the world review their experiences. In other words, the ratings and comments are real.

What are the best Surfers Paradise attractions then? Here they just a few, listed according to the number of reviews received, click here to see the complete list.

Ranked: #1
Total Reviews: 1,539
Undoubtedly, the biggest Surfers Paradise attraction is the beach itself. This beautiful long stretch of sand provided crystal blue wants and lots of space to move around. However, during the peak season, such as summer and school holidays, expect the beach to be crowded. The solution is simply to head to the farther north or south.

Surfers Paradise beach is a well-maintained public beach. Lifeguards are on duty daily so its safe for experienced, or less experienced, swimmers as long as you keep between the flags. Speaking of the surf, its a great place to learn to ride the waves. Though it isnt the best area for surfing in Australia, but the breaks are enough for learners.

If you dont know how to surf, thats not a problem either, as workshops and schools are abundant. If you dont have the gear or equipment, facilities for hire are also available close by.

The beach also hosts a series of activities such as the Magic Millions Barrier Draw, a horserace right on the beach, a sand sculpting exhibit and sports such as beach volleyball. On Wednesdays, Fridays, and Sundays, the crowd swells as people head to the night market. Around 100 stalls are set up selling a wide variety of very cheap goods you can take home as souvenirs. For entertainment, theres live music and great food to chill out and relax. These markets are found near Cavill Mall along the Esplanade.

There are literally hundreds of hotels and apartments in Surfers Paradise. One of the tallest is Q1 Resort and Spa. Previously one of the most popular Surfers Paradise attractions simply for its observation deck, Q1 has now recently launched a brand-new attraction called the Skypoint Climb.

Being able to experience extreme heights has always been a big draw card. In Sydney, you can walk the Harbour Bridge, in New York you can climb the Empire State Building while in Las Vegas, you fly over the Grand Canyon.

In Surfers Paradise, theres the Skypoint Climb. One of the newest Surfers Paradise attractions that takes you more than 250 metres above sea level. To get there, you need to ride the fastest lift in the country: it brings you all the way to the 77th floor where the walk begins in less than 50 seconds.

During the climb, you go through the staircase with almost 200 stairs. The walk usually lasts for about 90 minutes, depending on your speed. As you go along, you get to see many different sights of Gold Coast and preferably take photos, so that extends your tour further, but thats perfectly all right.

You may be wondering, though, if this is completely safe. Before I climbed it I wondered the same thing, especially since Im not a huge fan of heights. But I learnt that this attraction was in the works for a long time, and they took all the measures to ensure your safety.

For example, before you can even travel through the lift, you are provided with a suit specially designed for the climb and special instructions by a Climb Leader. Before you eventually begin the climb you have to clip yourself in a rail system as an additional safety measure, much like when you climb the Sydney Harbour Bridge if youve done that.

Take note, however, that its best to experience this attraction when youre A-ok in terms of your health. Never compromise your condition over a climb, particularly since you wont have access to water, food, and toilet all throughout the tour.

The observation deck, which I mentioned earlier, is still considered as one of the best Surfers Paradise attractions among locals and tourists according to TripAdvisor ? it comes in at #5 on their list of Things to do in Surfers Paradise. But since they belong to the same tour, we opted to combine them in this list.

Ripleys Believe It or Not

Ranked: #6
Total Reviews: 607
Where can you find the shrunken heads or a wedding dress thats made of 100 percent toilet paper? Theres only one place to go to: Ripleys Believe It or Not. Ripleys museums are found in different parts of the world, and were incredibly lucky that theres one right here in Surfers Paradise. You can find it in the southern section of the boardwalk near Cavill Mall.

This Surfers Paradise attraction spans around 8,500 feet with more than 12 themed galleries and an astonishing 400 exhibits that are being displayed.

Some of the exhibits here are interactive like the spinning tunnels, which adds more fun element and makes this so different from all the other museums. It also strives to offer something new regularly.

Normally the visit lasts for around an hour, but some end up spending more as they love to really linger in each of the exhibits. Thats understandable since its not every day you get to see something like them?thats why theyre called odd!

Like Infinity, this Surfers Paradise attraction is great for families and other groups. Of course, you can always go solo, but when youre in such a beautiful places such as Surfers Paradise, it feels great to share your experiences with someone else, although you always have the option to meet new friends?and were very friendly people.

Ranked: #5
Total Reviews: 721
Obviously wed agree that one of the best Surfers Paradise attractions is Infinity.

Located in Chevron Renaissance Centre in Corner Elkhorn Avenue and Surfers Paradise Boulevard, Infinity Attraction has become one of the most beloved Surfers Paradise attractions to visit by families, especially by the young ones. It simply provides a much perfect contrast to the laid-back atmosphere of the beach.

Infinity Attraction feels like its taking you to a whole new world! It features an incredible use of sound, lighting and special effects to heighten your multiple senses. Dare to cross the bottomless Light Canyon or feel like an electron inside a giant computer circuit bard in the Electron Maze

There are 20 interactive environments to feel and find your way through. In fact, it takes about 25-30 minutes depending on your speed to journey your way through this amazing experience

Infinity has been designed to be friendly for everyone, though we think it is more suited to those who are at least 8 years old. Nevertheless, we have catered to so many children and families ever since weve opened our doors. We even give you good rates especially if you choose to book online. If you read our reviews on TripAdvisor, our attraction becomes more exciting when you go there with friends and family. They say that some of the areas are truly amazing, beautiful and sometimes scary, but seriously, we simply love mystery?and who doesnt, right?

This isnt exactly Madam Taussauds but if youre wanting to experience the best Surfers Paradise attractions, its still worth the visit especially since its one of the biggest in the southern hemisphere. Unlike other wax museums, many feature Australias locals such as Kylie Minogue. It also has so many wax figures of prominent politicians and legendary historical people like Napoleon Bonaparte.

The exhibit is divided into two: World of Wax and Chamber of Horrors. The first one presents figures in dioramas to help you get the idea how these people really lived during their time or what they actually contributed to Australia and the rest of the world. The Chamber of Horrors, meanwhile, is pretty violent so its best to take a tour with a guide, particularly if you have children, to help them better understand what theyre seeing. This attraction is open from 10:00 a.m. to late in the evening, except during Anzac. Its closed the whole day during Christmas.

Ah, Surfers Paradise! I am definitely not surprised why so many people continue to visit. They can look forward to enjoying the best Surfers Paradise attractions with their friends, both old and new, and family.

Just in case youre travelling on a shoestring budget, youll get a bang for your buck by lounging on the beach?because its free?and then pop in and visit us here at Infinity; were one of the cheapest attractions in Surfers Paradise; as little as $16.10 if you buy tickets online.